Smoke & Mirrors launches a new series of cocktail drink – The Playful Eye delights on 1 November 2017. The menu consists of 10 progressive cocktails that use culinary techniques to artfully present an intricate play on names, presentation and flavours. 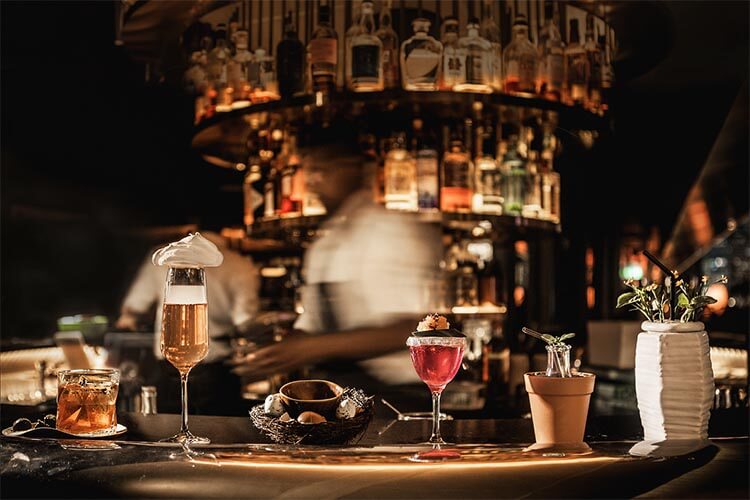 A little surprise for guests with its unique garnishes, whereby each of the cocktails represents Smoke & Mirrors’ essence of mirage and magic. From the cloud meringue used in Cloud & Air to edible ‘soil’ in Smoke & Mirrors! That’s fantastic!

The signature cocktail – Smoke & Mirrors uses tequila as the base spirit. A spirit-forward cocktail that has spiced notes and hints of French herbs. The garnish of an edible garden consists; apple, cardamom and different textures of ‘soil’, made of raw pistachios & cocoa powder. This drink is inspired by Susela’s favourite restaurant, the two-Michelin starred Mugaritz in Spain.

This cocktail is inspired by the spectacular views at Smoke & Mirrors. An aperitif cocktail meant to be enjoyed as day eases into dusk, Cloud & Air uses white port as its base, which has subtle nutmeg and eucalyptus flavours.

Named “Black River” in Japanese, this cocktail embodies the umami flavour. Vodka is infused with fragrant rausu kombu that produces a deep, intense flavour, which is then shaken with gomasio (made from black sesame and salt) and house-made ponzu tincture for acidity. The micro tomatoes and sea grape garnishes are specially flown in from Japan, where the burst of tartness amplifies the drink’s citrusy notes.

Inspired by the importance of the coconut fruit in the cultures of Kerala, India, this cocktail incorporates freshly grated coconuts into junmai sake for a lengthening taste. Coconut syrup and rum enhance the depth of the coconut flavour. The garnish is a slice of potato, cooked at 85 degrees Celsius for 40 minutes to reach a perfect density and texture. The potato slice is further flavoured with pistachio for a creamy, rich taste, and finally topped off with lemon zest.

Inspired by Susela’s curiosity of integrating botanicals into agave spirits, the Purple Gringo uses tequila blanco that has fresh juniper
berries added within. A red cabbage shrub made in-house provides a vegetal flavour and a rich, purple colour. The sherry provides a slightly salty note, complementing the garnishes of dehydrated red cabbage and miso caviar, made from red miso and sago, which leaves a lingering umami flavour in one’s mouth.

Aside from new cocktails, guests can also look forward to a refreshed curated list of spirits. Some noteworthy additions include Rutte’s Celery Gin from the Netherlands, a light and citrusy gin with a hint of celery; the award-winning Kavalan Solist ex-Bourbon single malt whisky from Taiwan, and the single-distilled La Venenosa Raicilla Sierra Del Tigre mezcal made from the wild foraged agave Inaquidens.

HACK IT by JUMBO Group of Restaurants