Met jackie at 2.30pm @ AMK hub, for urs more information, i was in the same mrt with jackie, the only thing is that, we lazy to walk and find each another due to full of people… LOL, so we decided to meet at AMK mrt station. haa..

Alighted At the mrt station and we quickly walk to the cathay counter to buy the Shaolin Girl ticket.. lucky to say tat, we still manage to get the last 4row from the back. XD, but we had nearly 3hrs to spend.. haha…So, we shop around the AMK hub and went to Macdonal to drink.
I order fried and coke wheras jackie order a large coke. During our rest in mac, got 1girl asking around ppl to do survey, lucky we nv kana, haha. We sit there around 30min like tat den walk back to AMK hub again due to Heavy Rain. ! 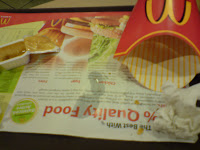 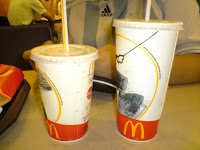 Shop and Rest untill 4.50pm, we walk back to cathay counter and brought combo set of “Family“meal, 2 Large coke and 1popcorn; cost $6.80, den we went in the cinemas hall 1.
haha…

now here, some short story about the movie [Shaolin girl](少林少女) :
Rin is trained in the art of kung fu for 9 years so that she can take over her grandfather’s Shaolin dojo in China. Upon returning to Japan she ends up teaching her skills to the lacrosse team of a sports science university.

Overall, this movie quite funny, haha, behide the last part when lacrosse final competition, rin team trash other group lo, the score is 100-0!!! LOL.
wtf sia, some more goal post explode! HAHA… everyone was laughting! Here below some keywords to share:
“Anything to eat? ya, here, an Egg“
“Everyone has their darkside in their soul, u must noe how to control it“
Here 2 i think… if wanna noe more, u can go GV or cathay, buy the ticket and watch it! xD
haha…
少林武功！
没白看一场！嘻嘻。
翻山越岭渡过江