Hi Readers! Welcome back to my blog! It has been a long while since my last giving a long wordy and picture post. However, Today I’m going to share with you guys a wonderful party I attended in 2 days back at 50 Scotts Road, Rooftop.

Last Friday evening, was invited by Hill & Knowlton to their company bloggers party, with the dress code of stripes and glasses and theme was on make a guess who the wally. This was my first time attending Hill & Knowlton Party and I had great memories in it, because i played the biggest Monopoly game ever in life. Woohoo! ^^

Took a few wall photos with the incredible photo machine whereby it tests your speed in changing the style you like within the certain second. lol… Funny and pretty picture produce out at the same time make a great look in everyone appearance!

Well plan on the romantic surrounding atmosphere with the decoration of “angry bird” piggy balloon with the small light of candles placing around the table, thus, delicious foods and drinks was provided to us before the exciting party start.

Likewise, very good to see my MP’s Mr Baey Yam Keng at this party too! Me and others few bloggers had a great conversation chat with him, sharing about blogging stuff and etc… It was nice to know him in person. haha… He is a great MP!

Party started! What big game we had played? Haha Yes!! It was the Monopoly game created by the HnK staff and the rule of this monopoly game was different from the usual monopoly we played. Basically, each team has the up to maximum of 4 members and it was just an answering question before you were allowed to buy the “places” or “land” you want.

My group did not win the overall but however we did our very best in conquering few places! hahaha… It was a great friendly bloggers match among us. Wee ~

How can party without taking any picture with new and old friends? Lol! Here it goes… Nice meeting everyone there at this #Hnksg party and I guess everyone had fun during that evening too. Sharing some picture here, you may visit my facebook photo album for more pictures regarding to this #HnKsg Hunt for Wally party! *Smiles*

Picture with Andrew, very friendly guy and nice chatting with him too!

Finally here my chance to take a picture with Adrian! I call him Master of blogger who cover most of the Entertainment Events! *salute him* haha

Picture with Nadia! Recently having a “Good Fight” with her! lol

Before the party end, there was a drinking game carry held. William, GJ, Holly Jean, Bianca and I were in the same group to challenge the drinking “speed” with the other group. Each of us was given a different type of alcoholic drink and I got 2 cup of red wine to bottom up. hahaha… 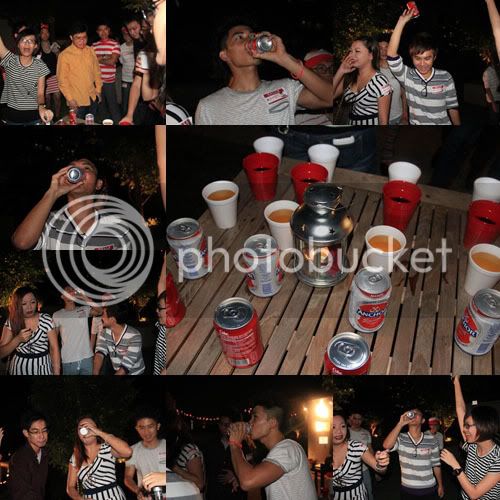 Yay! My group won in the drinking game!

Prize presentation time!!! H&k Staff represent the prizes to the winner of the night. Scroll down and see who won the prizes! Haha… Congrats to all the winners!

Adrian who won in Poking many angry bird piggy!

Hunt for Wally, So who is the real Wally? The answer is….. Rosemary!! It was an exciting party with group of friendly Hnk staff and bloggers. Last but not least, took a group picture before I call it a day. Thanks for inviting and hope to see everyone soon! 🙂