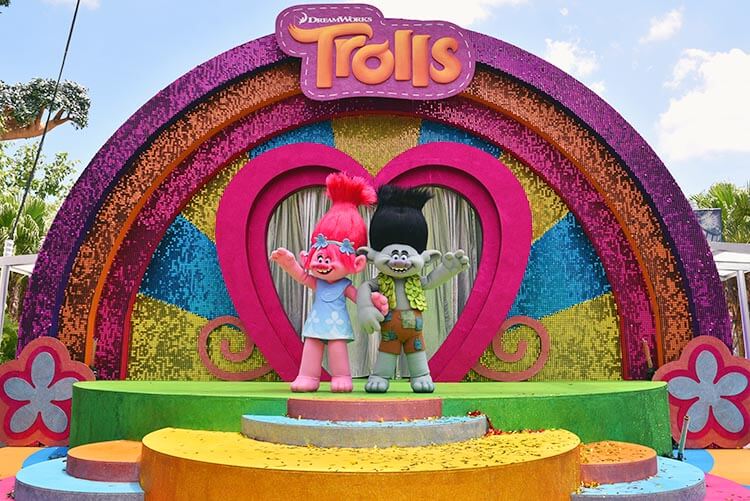 DreamWorks TrollsTopia has landed in Universal Studios Singapore this summer. Fans of DreamWorks Animation’s Trolls can join Queen Poppy and her friends in this glitter-ific world filled with music, heart and hair-raising adventures. 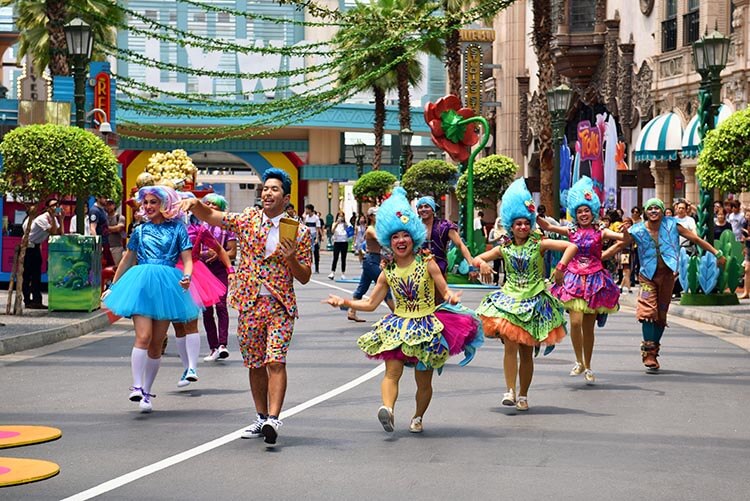 From now till 29 April 2018, you can not only sing and dance with your favourite Trolls; you can even play games with them and Troll-ilfy yourself, bring a piece of TrollsTopia with you. 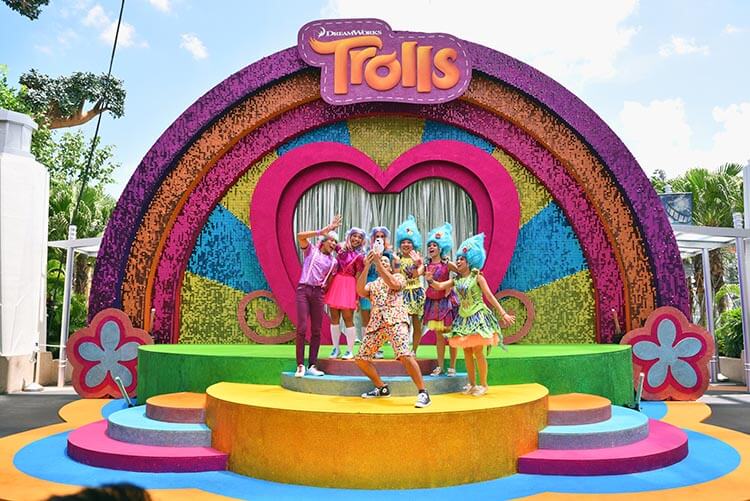 Start the day with the Musical Show – TrollsTopia. Set against a shimmery rainbow-inspired Hollywood Lagoon stage, this 15-minute performance where the eternally optimistic Princess Poppy and her fun-loving friends come together to celebrate her coronation as the Queen of DreamWorks TrollsTopia will get you soaked up in the Trolls mood. 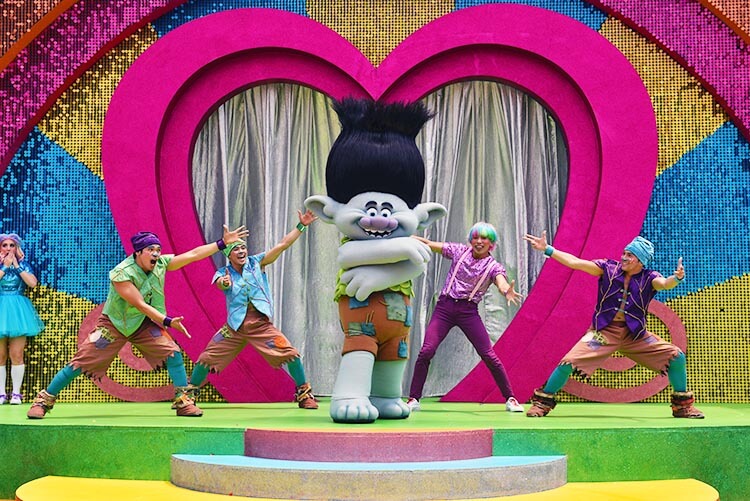 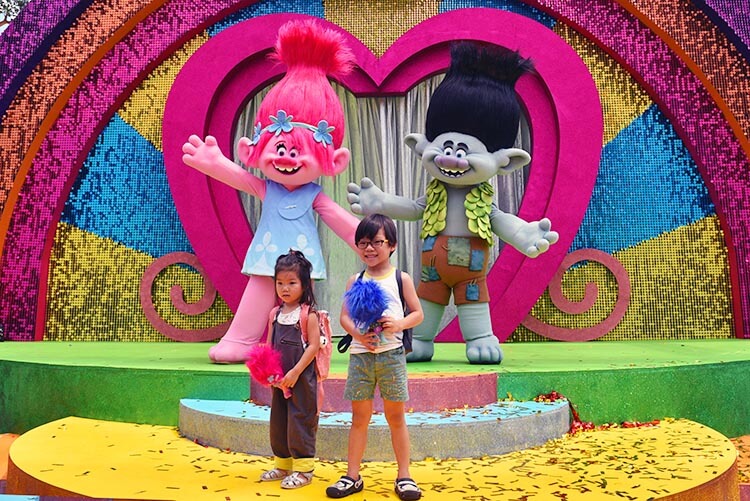 Featuring hit songs from the Trolls soundtrack such as Justin Timberlake’s ‘Can’t Stop The Feeling’; this celebration of music, happiness and love, will definitely get you dancing and singing along with these loveable friends. After the performance, you can even join the adorable duo, Poppy and Branch, for a warm, fuzzy hug time and memorable photo moments. 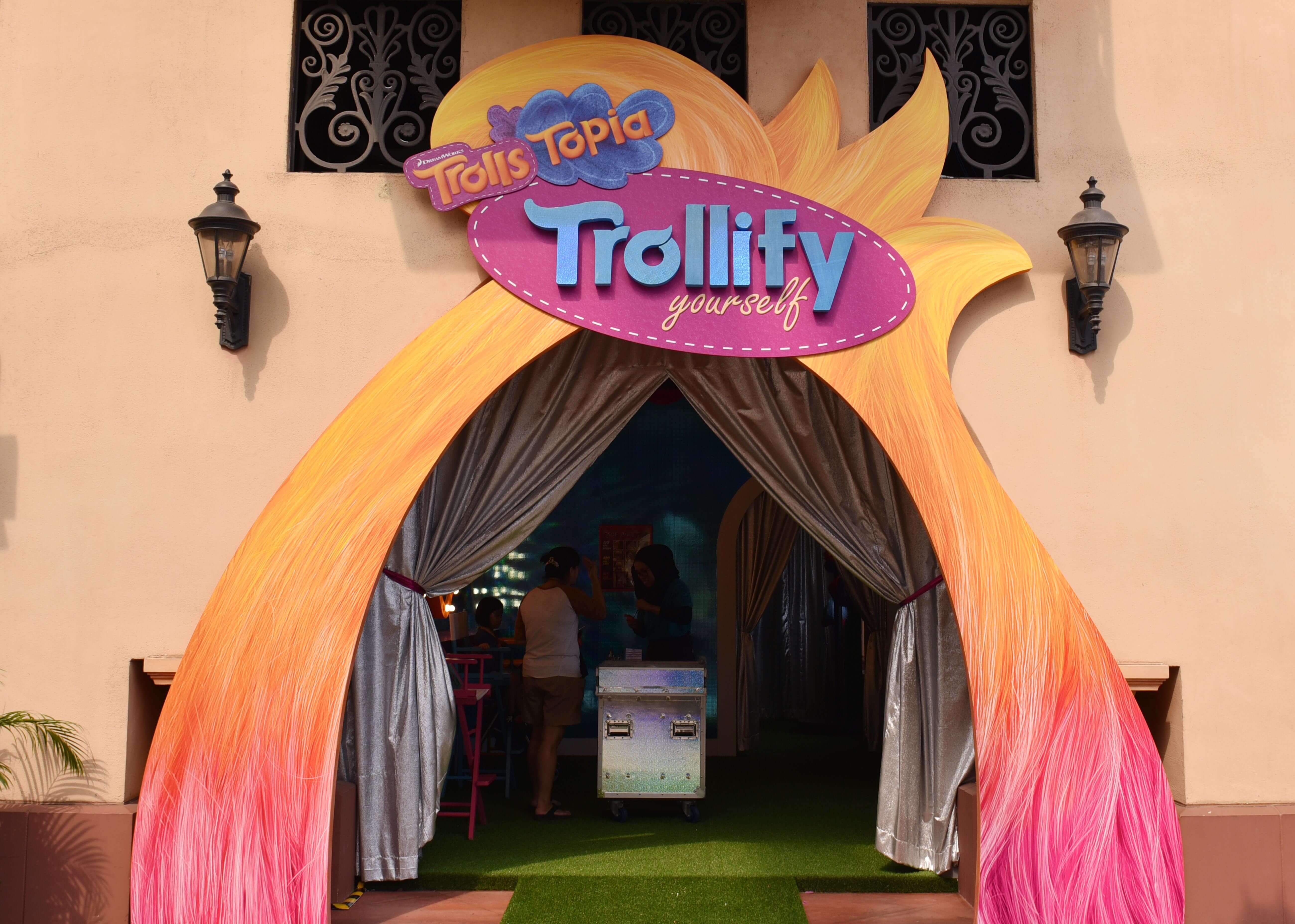 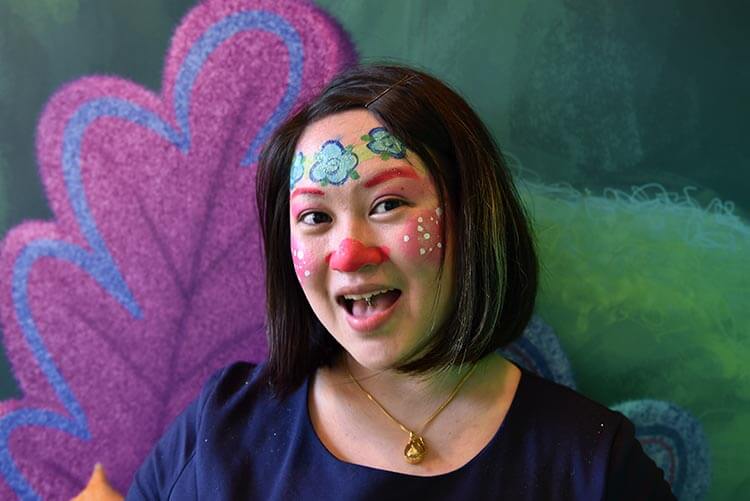 After which, go get your Trolls gear on at the Trollify Yourself corner. The friendly artists will help let your inner Troll come to life with face painting and temporary tattoos. The paints used are children friendly, non-toxic and easily removable with water. Don’t forget to wear the signature DreamWorks Troll wigs and have a picture with your favourite DreamWorks Troll characters! 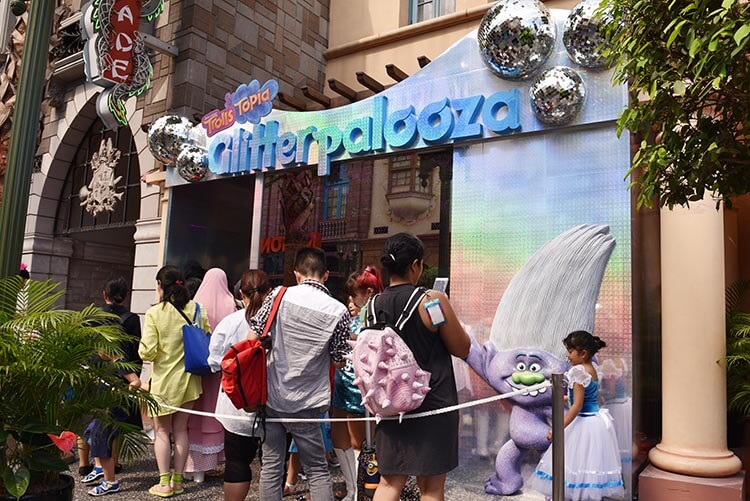 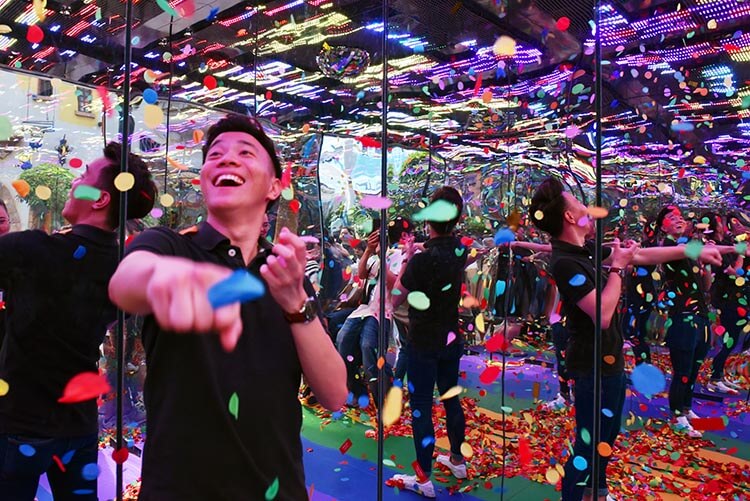 Know that glittering disco dancing Troll – Guy Diamond? Join him in the Glitterpalooza, bust out your best dance moves in this glittery mirror confetti wonderland! Grab some Insta-worthy shots inside and get a chance to catch exciting prizes flying through the air. 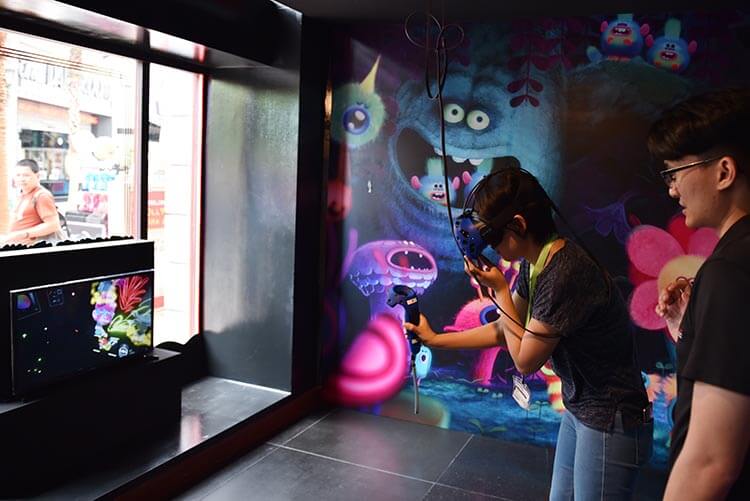 Next door, pop into the Hollywood China Arcade and join the Trolls in 2 different multi-dimensional virtual reality (VR) experiences. After you wear on the VR Goggles, you are transported to TrollsTopia, joining Poppy and Branch in an endless space of creativity and imagination as you create 3D virtual art with Tilt Brush and a symphony of colours. Grab a screenshot and you can bring them home as souvenirs in a form of keychain or photo print out. 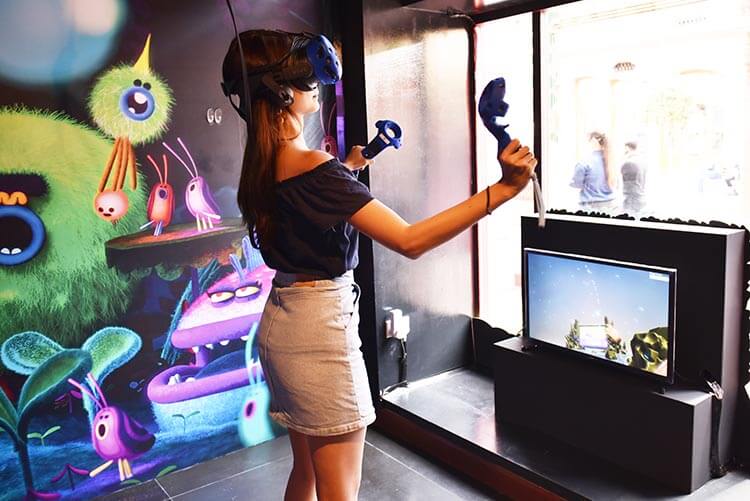 Another VR experience is my favourite! You can raise the level of excitement in a thrilling VR music video game and ‘bash the beats’ from the catchy soundtrack of Trolls as you travel around TrollsTopia. Those who like the Taiko no Tatsujin in arcades, will definitely enjoy this experience! 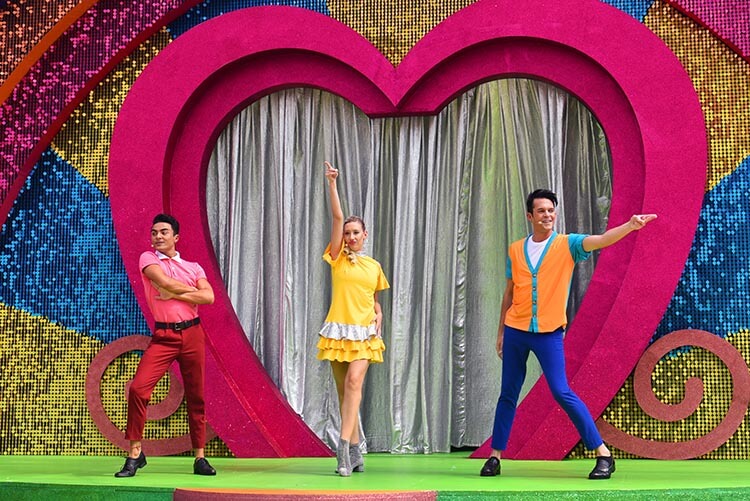 After all these fun, go head on back to the Hollywood Lagoon Stage and join the dynamic Hug Time Trio in a grooving disco time. They will belt out up-tempo songs from the Trolls animated film and top 40 hits that will get all of you singing to your hearts’ content.

Singapore residents enjoy online savings on admission at S$72 for an adult one-day ticket (U.P. S$76), along with a complimentary S$5 meal voucher. 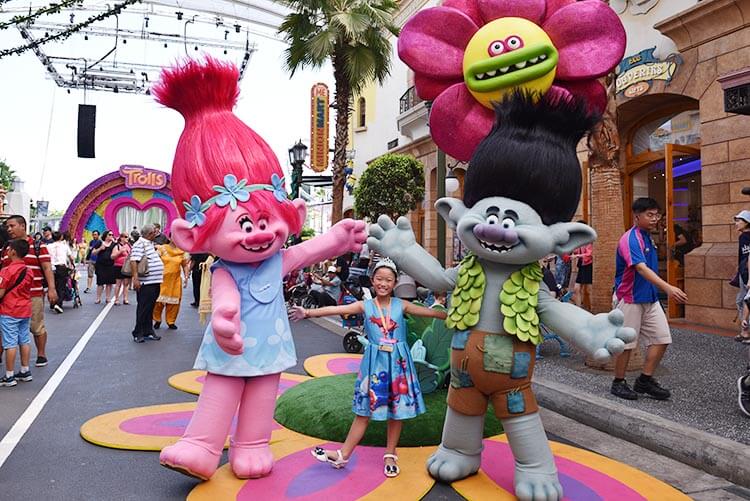 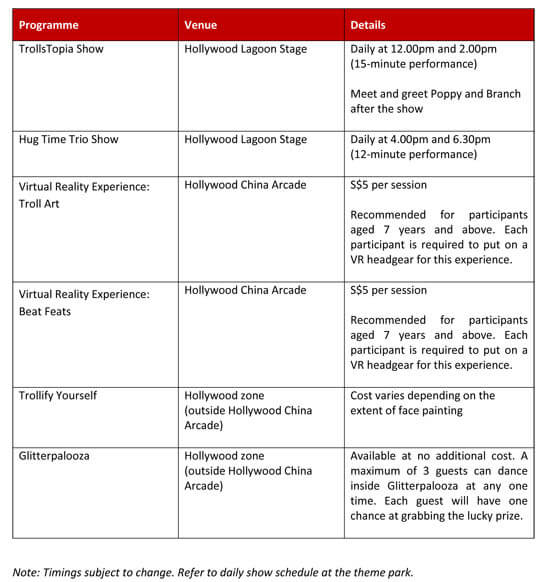